Annabel May is currently undertaking a Level 3 Business Administration Apprenticeship at New Schools Network. In her second blog post, Annabel shares more about her apprenticeship experience and running her first half marathon. 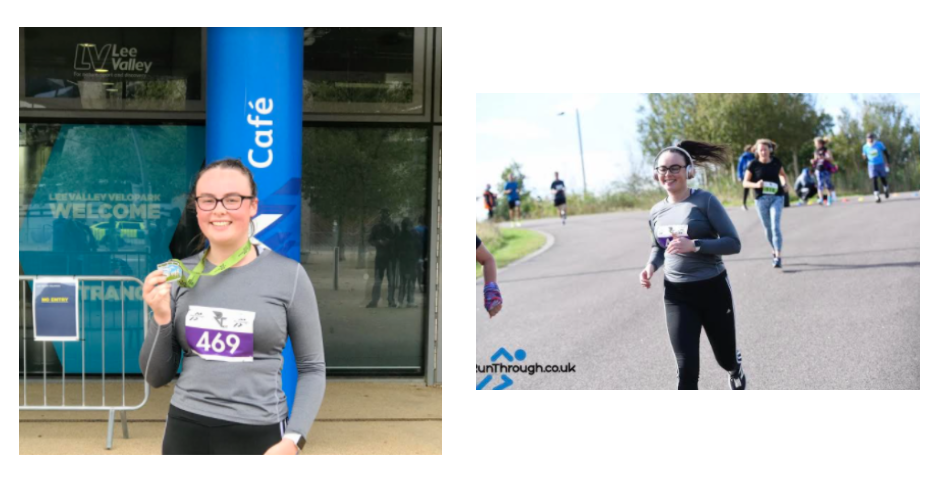 In the early stages of my Apprenticeship ‘journey,’ I knew that I wanted to achieve a balance between finding a fulfilling Apprenticeship and enjoying time to pursue new interests. This work-life balance is extremely important and whilst both WhiteHat and, after achieving a position, my employer, have been extremely supportive, I felt that it was important to take personal responsibility and find interests in my personal life to ease the stresses of working life. This led me to discover the ‘joy’ of running.

I have never been an avid runner… even running for the bus was a bit too much to ask! During PE lessons at school if someone said to me ‘today is cross country’ a small cry would come from within and I would be the first one to fake an ankle injury to escape the suffering.

At the start of lockdown, I managed to escape the bustling city of London and head back to my home county of Leicestershire. With the feeling of being cooped up slowly dwelling on me after staying inside for several days, I used the hour of exercise each day to go on walks around the surrounding areas. This was very pleasant and gave me a small sense of achievement after each day. We take walking for granted each day – often step counting and calorie counting takes over the enjoyment of walking and soaking up our surroundings. After walking the same routes numerous times and learning where every pothole was I decided that it was time to mix things up and go for a run!

I decided to start small and run a mile, unfortunately at first, this feat was too big for me, and after three minutes of running, I began to slow down and eventually walk. I did find those first three minutes thoroughly enjoyable and with the ‘Hot Hits UK’ playlist blasting in my ears, the motivation to go on another run was there. After a day of rest, I ventured out again this time running further and over time the distances began to increase, and the likelihood of me walking decreased. To say I never walked during these runs would be a lie, a usual tactic of mine would be to run past the houses then when I would get to an open space with no people I would walk.

I was intrigued as to how far I was actually running so downloaded a popular running app Strava. This app enabled me to see my time and distance as well as a whole host of other statistics. I was never concerned with the time and how long it would take me to run five miles as long as I did it, that was my main focus. Achieving small goals made a big impact on my mental wellbeing and gave me further confidence in my ability. Often seeing other runners with lots of technical equipment and wearing shirts with numerous marathons that they have run can be quite intimidating. At the end of the day you can only run at your own pace and whether it be for a mile or ten the achievement of getting out and exercising is still there. Perhaps this is a lesson that I can transfer across the board…

After going for a run every few days during lockdown I set myself a challenge of being able to run a half marathon (13.1 miles). If you had suggested this idea to me at the start of lockdown I would have laughed, never imagining it to be possible. I set out on this run one morning and I was off to a good start but, as the run continued, I was going further than I had run before until at mile 12 I felt ill and unfortunately could no longer continue. I was gutted. I was a mile away from achieving my goal yet could not make it over the last hurdle. After a few days of rest and support from my family, I got back out there and had a second attempt. This was successful. I had officially run my first half marathon. To say I was proud of myself was an understatement, I was ecstatic.

My journey has far from ended and with the confidence in my running ability I have now signed up to run a half marathon on the 26th of September for the British Heart Foundation. I know that there are going to be people in the race that have been running for years and some may class this as their training for the full marathon. The only person that I am going to be racing against that day is myself. There are always going to be people that can run faster than me and I may never come first, but I am ok with that. Knowing that I have put myself out there and done what is right for me is an achievement in itself. Equally, I know that in my working life, there will be people who are more experienced than I am and have more knowledge of the business that I am working in. That’s why I feel lucky to have the support of the WhiteHat mentors and my colleagues at work. If you set yourself a goal and break it down into stages and do your best, you can achieve what you want to achieve.

To read the first part of Annabel's journey - click here!